More of an art critique than a review of the Witness, the video has english subtitles

As we were listening to Bioshock Infinite’s “Will the Circle Be Unbroken” cover, we had a YouTube recommendation for another video game song. We started building a little playlist, and we’ve found enough to give it a real purpose.

The rules are quite simple: only songs – sung lyrics – composed for a video game.

Many songs were created for movies, animated or live action, from famous Disney songs to aptly named ‘musicals’. Not long after a lot of them became popular, then classics.

Video game music isn’t new, but it was only in 2010 that ‘Baba Yetu’ – main theme of 2005 Civilization IV – got nominated, and won the “Best Instrumental Arrangement Accompanying Vocalist(s)” category.
Before that, the Spike Video Game Awards (VGA) and VGX had a several music categories, from 2003 to 2013.

It is a mesmerizing soundtrack, the vocalists are fantastic, and Christopher Tin’s music composition gives epic and hopeful dimensions to the track. The lyrics are a Swahili translation of the Lord’s Prayer.

We couldn’t help but notice a fading, but existing, difference between English and French:
It is far more common to use song for any kind of track in English, here, look at > this < : in every “10 SONGS” article, you’ll find less than 3 actual songs, meaning, sung lyrics.

In French, we’re sliding towards this too, people gets less and less angry if you say ‘DAMN THIS MUSIC IS MY JAM’ when it’s actually a song, and so on.
But I’ll never forget the difference thanks to my highschool music teacher’s stare.
We’ll continue to add songs from your suggestions! Tweet us @themgames with the link and leave the rest to us!

By Lisa Schaeffer and Oscar Barda

An Introduction
We play an unreasonable amount of DOTA 2 here at Them Games. In fact, we play it so much that given our jobs as game makers, we couldn’t but notice that no new hero has been added to DOTA 1 since May 2013 (Nerif the Oracle and Kaolin the Earth Spirit were then ported to Dota 2 and modified but no new design has surfaced in the last 2 years).
But if you caught the DOTA train after the DOTA 2 stop, you might not know that Heroes used to be designed by the community. People would ping the designers or just add new heroes themselves (because DOTA was a map made in the Warcraft 3 editor so anyone could edit it).

Nowadays, Dota 2 belongs to Valve and although modding is being added as we speak, there will still always be an official DOTA 2 on one side (with millions of dollars in the balance) and community created maps, mods, and Heroes on the other.
So to herald the coming (back) of the age of people creating their own Heroes (and we’re probably going to be among them, teasing teasing teasing) we went on to compile a heap of informations about all these characters.
What kind of stats would be interesting, what conclusion do you make of them combined?
Note: We have a lot of ideas and this article will change very soon, send us your feedback! 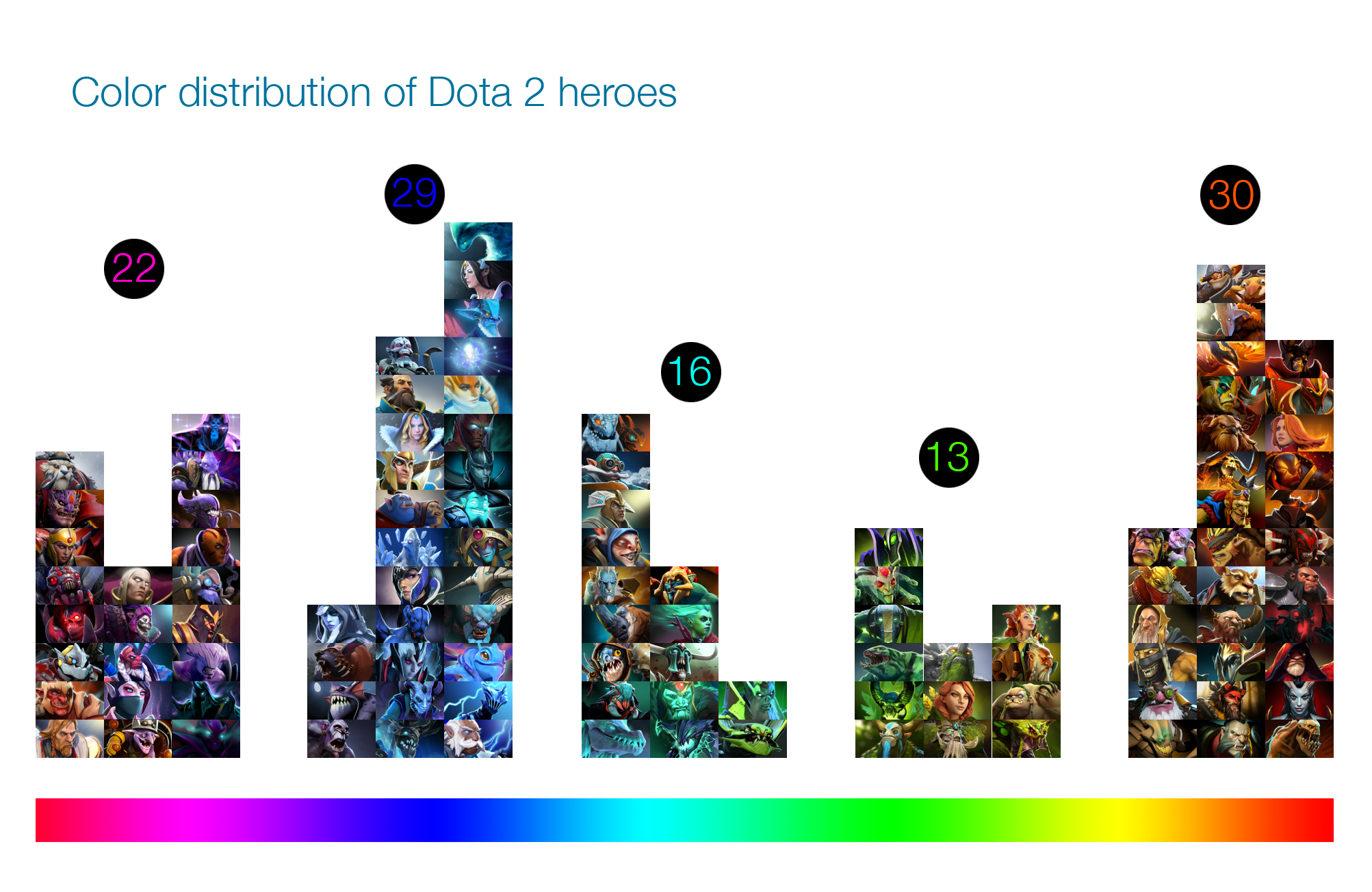 DOTA 2 Heroes are designed by Valve with specific color palettes and settings.
For more information on Valve’s take on character design in DOTA 2, here’s the Official Character Guide, with explanations on the palettes, settings, silhouettes, and much more!
Now, what kind of useful information this homemade gradient classification can give us?
First, there aren’t a lot of Cyan/Green Characters, and a lot of Blue & Red ones.
We cannot say that it is a ‘Dire is red, Radiant is blue’ separation as Heroes are mixed in both colors.
Second, most Heroines are in the blue-ish area, the four exceptions being Lina, Windranger, Enchantress, and Queen of Pain. Again, that is not really a hint for their alliegance, as Lina is on the Radiant side and Queen of Pain on the Dire side .

The goal of this table is to allow you to see what races and species already exist in the Dota 2 universe and get inspired (maybe you would like a character to be the cousin or the kin of another hero, or maybe they’d be the worst enemy of your favourite hero or a cursed Wildling or ride a Thunderhide?).

We’ll say our thanks to Hefaistus and 1337_n00b of the DOTA 2 Dev forum for this Lore Thread.
It’s not perfect: we grabbed information from comics, official lore, DOTA 2’s Gamepedia (thank you so much guys), facial features (like ears, eye shapes etc.) body types and body features (number of fingers, tails, fins etc.) and… Yes, personal cuts. We had to, really, there’s just not enough information to actually sort the 110 heroes (without even counting the two yet-to-be-released ones) without making some choices. Otherwise it would have been 110 individual rows.
Its race section is more than useful to understand how difficult it is to choose either a race or a category. For exemple:

Well, we had to choose, and it’s not perfect, but the lore isn’t either, yet is deepened with each new Hero. Stay alert!

Heroes Repartition by Side per Attribute 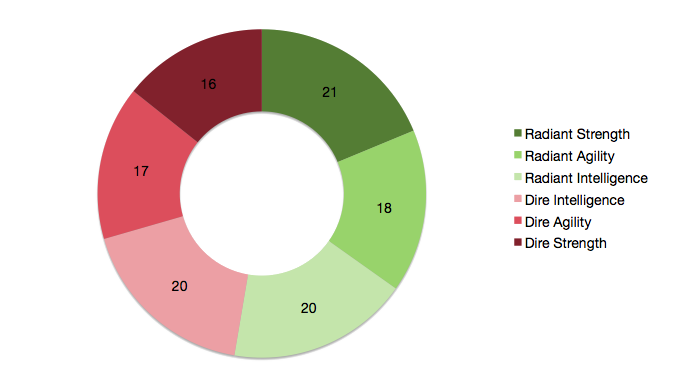 [Radiant is Green – Dire is Red – Abyssal Underlord & Arc Warden have been added]
The repartition between attributes is fairly balanced:

More stats on Attributes and Roles

On Strength Heroes
There are 37 Strength Heroes. Of these, the most prominent role is Durable with 29 Heroes.
This is noteworthy as ‘Durable’ isn’t a term widely used in the community vocabulary, compared to ‘Carry’, or ‘Support’. But it is logical, as Strength adds hit points.
There is only one Female Strength Hero, Legion Commander.
There are two Neutral Strength Heroes, Phoenix and Io.

On Agility Heroes
Most of Agility Heroes are Carry, with 29 Heroes sharing this role out of 35.
This is the category in which there are the most Female Heroes, up to 9, almost all of them having mainly a Carry role.

On Intelligence Heroes
In this category, 26 out of 40 have a Nuker role. ‘Nuker’ is used, but ‘Ganker’ is way more used in the community.
Here, there are most of Neutral Heroes: Puck, Visage, and Ancient Apparition.
Also, here is the rest of Female Heroes, up to 7.

Heroes Repartition by Gender per Side 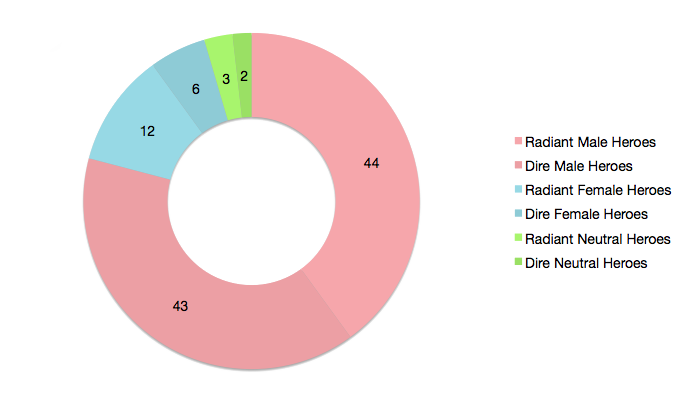 [Neutrals are Green – Females are Blue – Males are Red]
This pie chart is far more interesting, as it shows us the repartition by gender of all Heroes.
For example, Broodmother as the feminine pronouns (she/her), she’s female. Puck has neutral pronouns (it/its), it’s neutral.
Males are pretty obvious.

Conclusion
As you can see, DOTA 2 has a lot of different races and backgrounds, yet genders are still pretty much like they are on Earth: males, females, and some animals or otherworldly entities that just don’t like to be called either he or she.
We at Them Games feel that there are too many dicks on the dancefloor and urge you, if you were to create some new heroes for DOTA 2, to create Big women, old women, tall and short neutral people, various shapes and races and colors! Make the world of DOTA 2 a weird and interesting one to play in! It’s a game in which you can play an Undead Oglodi, a Greek god, and monsters from the infinite corners of the universe…
Why not a more diverse crowd?