So we’re working on a musical game, that’s no secret, and I wanted to share with you some of the thinking that goes on behind the scene and into designing the experience.

Now to be absolutely blunt: it mostly came from a good intuition. This was no grand scheme that we or I had envisioned for month: we stumbled upon the idea and refined it again and again by listening to what our system had to say about itself. But I’m getting ahead of myself here, let me preface what I’m about to say with long exposition and game design principles and theories… ’cause that never gets boring. GAME DISSECTION AHEAD ! 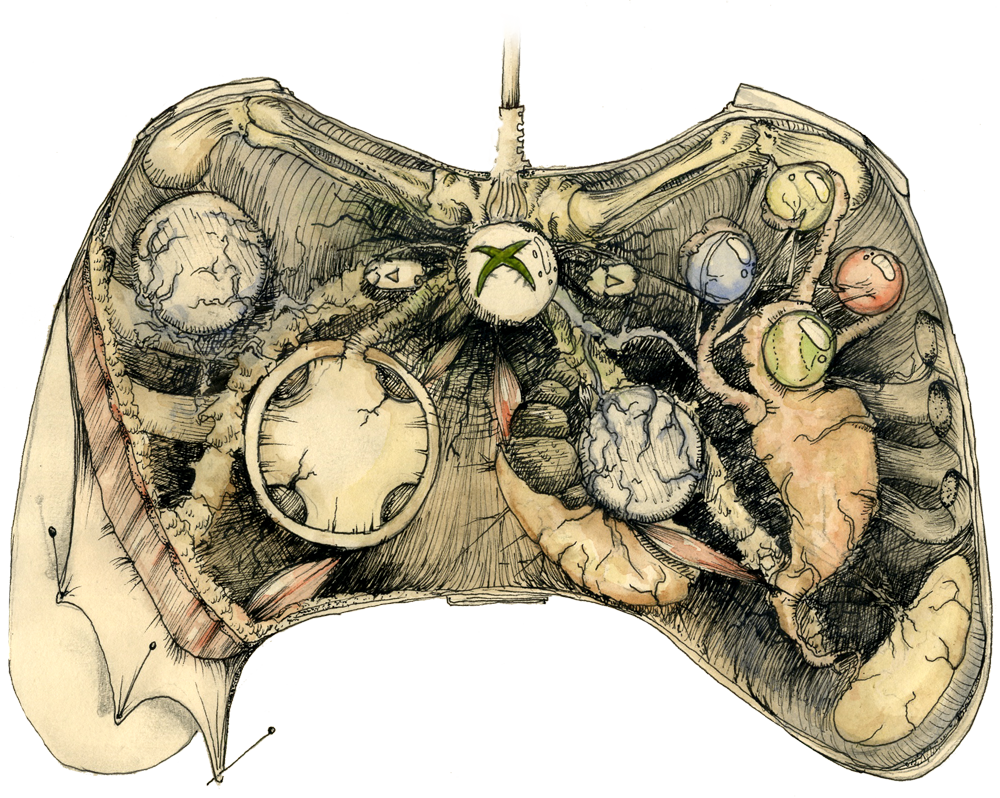 So as video games took a seat closer and closer to the front -partly due to their moneymaking capabilities- it enabled enough smart minds to picture a carrier in the field, and to question what games have to them in general. While ‘games’ outside the field of numeric or digital or video games existed for a long while, they have never been under as much analytic scrutiny in the history of mankind than in the last 10 years.

One of the first things that came to light early in this ‘ludology’ or ‘game studies’ endeavor is a concept that we called ‘ludonarrative dissonance’. It was made to talk about a friction in-between play (ludo) and storytelling (narration) that was undermining the message games could have. It was coined by Clint Hocking, and was widely adopted, partly because frankly, it’s a fancy name and people (me included) that started to study games in depth wanted to be taken seriously. Nowadays, Clint himself pokes fun at the term itself, while games are becoming a widespread academic curriculum and every student goes about vanquishing ludonarrative dissonance in their term paper. Not that it does not exist, mind you, I would just argue (and we have a forum for that if you’re so-willing) that it’s not the only scope we have to look at the difficulties of carrying meaning through dynamics (and worry not, I’m not alone in that).

So ludonarrative dissonance is about many things, but amongst them is the authorial balance between the designer and the player. Games are an incomplete media and need the player to be manifested. Not to exist, mind you, but while a book is a book whether or not it’s unfolded, a game exists in systems and possibilities that need to be awoken and made experience to ‘exist’ as an instance of a game. The book is the same, its interpretations vary. No two games are the exact same. Why was I talking about all that again?

Because when Them Games started thinking about inSynch, the only thing we knew was we had to make a music game; and in a music game, the question of authorship has, more often than not been very restrictive on the player side. See, when playing Guitar Hero, for all it’s awesomeness and social value, you are not making music, nor are you playing music, you are letting music happen or failing to do so. Press the right key and the music unfolds, press the wrong one and it does not. But who are you again in this system? You are the person pressing play on the remote or turning the pages to push things forward. The game encourages you to do it, it does so in a very convincing and entertaining way, but it does not do any more that this. You, as a person, are way less interesting and the intent that you express is so little of you so to be non-personal.

You are an intelligent being, yet Guitar Hero sees you only as an agent of it’s own design, pressing buttons along so well that in the end, we prefer to talk about “rythm” games than music games. What the system is telling you is that you have no part in it, it’s a game about conformity and fantasizing about being a rock star, but never about becoming one. The more you play, the harder the game is, the more of your brain goes into full on automated mode and the less of an intent you express. You could say it’s a very good game about being in the show business.

On the other hand, wouldn’t I be a lazy game designer to give you a cello and pass it as a game? Yes, this is the other end of the spectrum, total freedom, an instrument, a toy if you will, made with the rules of acoustics, with its own internal consistency, but with no goal. If you have a specific goal that awakens agency on the part of the player, you make a game, the wider and more distant the goal, the more of a toy your game becomes. And don’t get me wrong, Minecraft is barely a game, yet it’s toylike nature is a thing of beauty, and on the other hand, Heavy Rain is barely a game because it asks for almost no agency from the player and it is still a very nice experience even if more akin to interactive films. 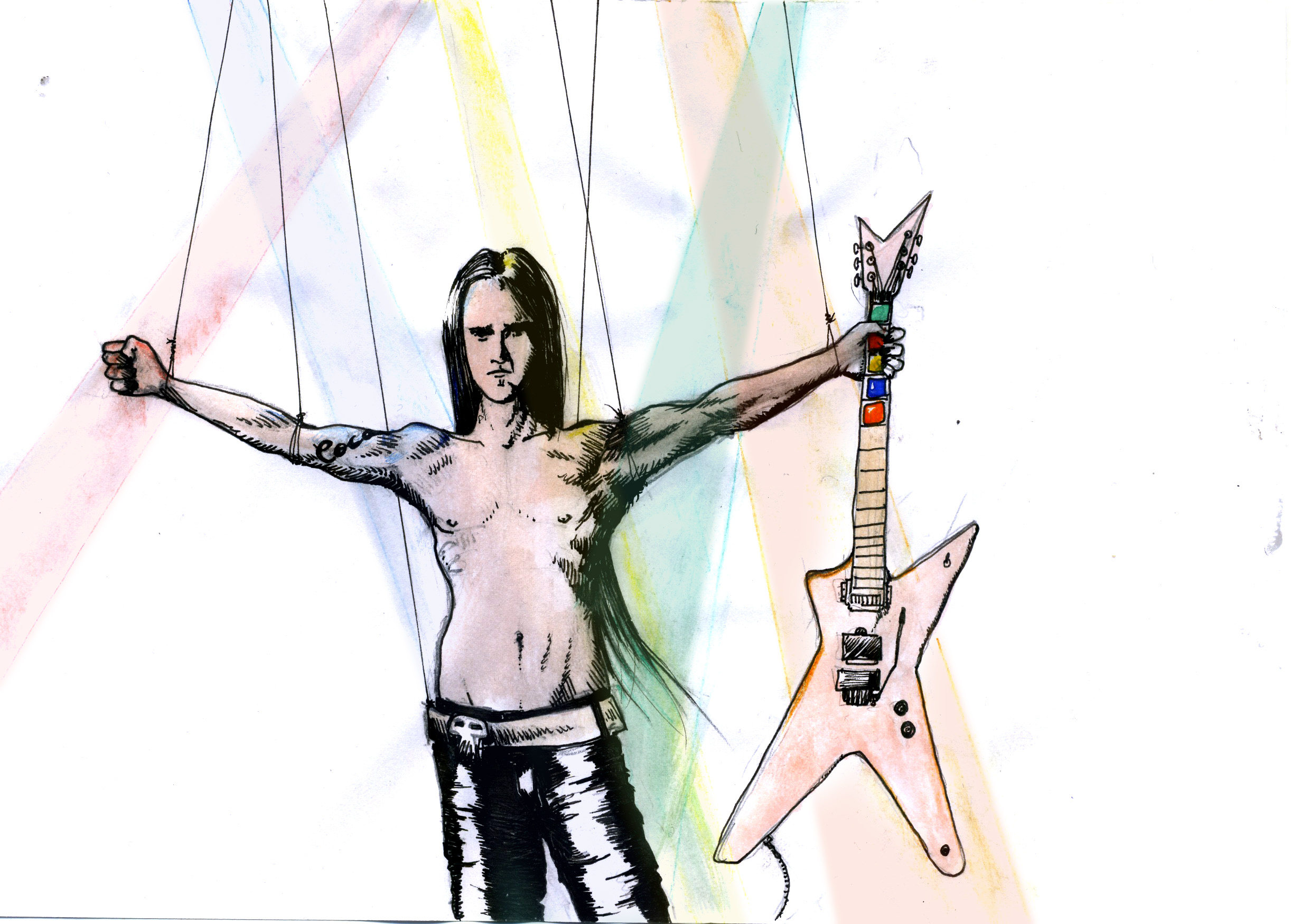 Willing to strike a balance in between those two extremes, we tried to make a system that communicates intent “please react to that” and accepts as valid a lot of what players give us back. This means that while there is an absolute and straightforward algorithm to optimise your scoring in score mode, there is also a lot of room in the system to go your own way and try to build the music and the score according to your taste. We are not and will probably never be claiming that this is the best or only answer to the question of authorial control in music games, since we don’t really believe that there is such a thing, it’s just what we wanted to make: a game in which you the player are playing with the music rather than simply playing along. We will give more details on scoring systems and game designs later.

Now onto the question of meaning. There is a question that has been asked by a lot of people, of which Clint Hocking which gave a very interesting talk at GDC in 2011 on that very question. What do the rules of inSynch express, what do they mean? What do you actually art taping on your screen or keyboard and why would that meaning be relevant to you?

Well… Hard question… You know, babies have this thing: playing around with the world, fiddling with stuff around them to understand how they work… Our adult brains still have that: you get into a game and the minute you are in, you start to test things and make sense of the outcome. See, that’s what will save you when aliens have abducted you and you’re on a distant planet with weird gravity and air displacement: your brain will fall back to child mode and you will start to play with things. And all those alien adults will go “Why is he putting things into his mouth? No! Don’t drop that on the floor that’s my vase!”… In inSynch, you start a game and try to make sense of the system: you do things and look at outcomes and results to see how to progress but whether you know what you are doing or not, you express intentionality that is fed back to you.

It starts as a conversation with someone, with a system you don’t know, and as you play, as you get better, you start to actually express yourself and listen to that expression. As you get better, the system fades away as an intermediary would and you start talking more and more to yourself, as if seeing yourself in a mirror for the first time. Making music, listening to it, adapting or trying to adapt parts of it under the rush of an ever-changing environment. InSynch is about fragility, it’s about how you balance the way you want to express yourself and the stresses and mishaps that happen along the way. It’s a game about finding what you think is true in music, what you feel is most reflective of a level’s texture and geometry. How does wood sound as a tune to you? What is the melody of concrete? What does plaster or resin sing?

We hope you’ll want to find out come this fall.

All illustrations by Oscar Barda for Them Games. You can use them at will, simply credit us please. And drop us a line via the contact section if you’d like them in higher resolution.